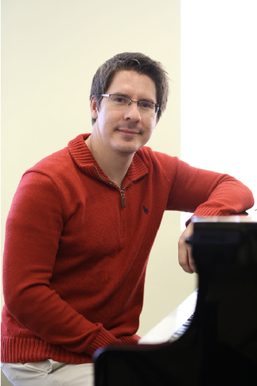 In addition to teaching piano for the past 19 years, Joshua Del Dotto served as            accompanist and vocal/instrumental coach at Gordon College in Wenham, MA. Mr. Del Dotto is currently on staff at North Shore Music Theater, accompanist for the Winchester Community Music School, and Music Director for the North Shore Children's Theatre.  Mr. Del Dotto is active as a solo performer and collaborative performer with the Boston Lyric Opera and with various ensembles and professional soloists throughout the region. He has performed extensively and has premiered several works by current composers. He has given lectures in over 50 schools across the state of Massachusetts on classical music, focusing especially on opera and the power of music to tell a story and communicate emotions that words alone cannot express.
Mr. Del Dotto enjoys exploring the different facets of classical and popular music. In addition to having been a Yamaha trained and certified instructor at the Yamaha Corporate Music School, he has taught piano and served as accompanist at the Community Music Center of Boston, Riverside Theatre, and the North Shore Music Theater, among many others. He is actively involved in musical theater and has musically directed and/or accompanied over 47 shows in the Boston area over the past 19 years. He has also worked as piano instructor, accompanist, and summer musical theater director at the Performing Arts Center of Metro West, helping to establish and nurture PAC's summer musical theater program. He has served as musical director for churches in both Massachusetts and Colorado. Locally, Mr. Del Dotto enjoys serving as accompanist for both Marblehead High School and Salem High School.  Mr. Del Dotto received his undergraduate degree in piano performance from Miami University in Oxford, OH, studying under Dr. Robert Thomas.  Mr. Del Dotto received his Master’s degree in Piano Performance from Boston University, studying under Dr. Maria Clodes-Jaguaribe.   Mr. Del Dotto is a member of MTNA, MMTA, NSPTG, and NEPTA.

FUN FACTS:
– Josh began his piano studies at the age of 6 years old outside of Detroit, Michigan.
– Besides classical music, Josh enjoys listening to his favorite bands,  most notably, The Beatles.
– Josh also enjoys playing golf, especially when he manages to play well.
– Josh enjoys playing acoustic guitar on the worship team in his local church.
SARAH DEL DOTTO, Owner/Teacher 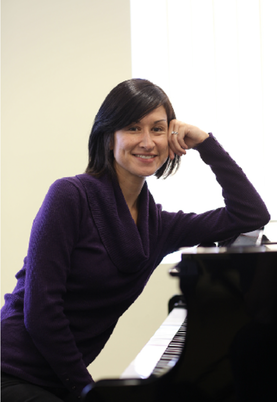 Sarah is a graduate of the prestigious, world renowned, Eastman School of Music located in Rochester, New York.  While still a student at the Eastman School, Sarah worked with faculty in the Community Education Division where she was invited to be an aid in the early childhood music program, working with families and their children, ages 6 months up to 4 years old.
Immediately upon graduation, Sarah received a position to teach in the Rush-Henrietta School District (NY) and the Greece Central School District (NY) before going on to be the Choral Director in the Greater Johnstown School District.  It was in Johnstown that Sarah directed five choirs, where her students were regular recipients of local and state awards and honors.  During her years in New York, Sarah was also sought out as a guest conductor for choral music festivals.
Sarah completed the Master of Music (Piano Performance) program at the Longy School of Music, in Cambridge, MA in 2010.  She was a student of Ludmilla Lifson.  While a student at Longy, she was awarded the Mary Ellis Smith Prize for Outstanding Achievement in Piano Pedagogy.  Sarah has performed in numerous recitals both solo and as a collaborative artist throughout both Massachusetts and New York.
Besides being a dedicated piano teacher at the Del Dotto Piano School, Mrs. Del Dotto currently works as the middle school choral director and music teacher for the Dana Hall School in Wellesley, MA.  In addition, Sarah is the Director of the Old North Festival Youth Chorus as well as the youth choral director for Old North Church in Marblehead, MA.  She has also worked as a teaching artist for the Metropolitan Opera Guild.  Previously, for nine years, Sarah was on the faculty of the Boston Yamaha Music School where she taught group classes and maintained a large private piano studio.  Sarah is excited to be located on the beautiful North Shore!  Mrs. Del Dotto is a member of MTNA, MMTA, NSPTG, and NEPTA.

​FUN FACTS:
-Sarah began her piano studies at the young age of 5 when she lived in Tokyo, Japan.  She still remembers the piece she played at her first recital!  The “Arietta” by Mozart.
-Sarah loves to practice yoga, and bake yummy goodies for anyone to try!
-A few of her favorite composers are Beethoven, Debussy, Part and Reich.
-Sarah loves Disney movies!